Honestly, this gig could not have come quickly enough.  I’ve been a fan of Linkin Park since I picked up their Minutes To Midnight album back four or five years ago, and I’ve wanted to see the California six-piece live ever since.  If you’d told 14-year-old me that I’d get to see Linkin Park live someday, I probably wouldn’t have believed you.

But, back to the gig itself, starting with the support act – Of Mice & Men were an odd choice, I thought, considering the genre difference.  However, their sound was loud enough to fill the O2, and their performance was electric, like it had been at Leeds Festival a few months ago. 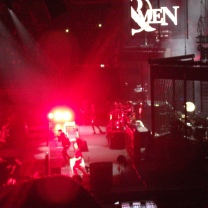 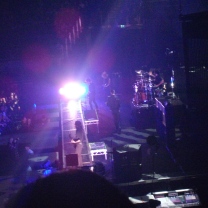 As an aside, by the way, check out how close we were to the stage!  I was a little worried when I found out we had seated tickets, in case we ended up right up in the back corner of the arena, but I was more than happy with these seats – the closest I’ve ever sat to the stage at an arena gig so far!

Anyway, back to Of Mice & Men.  I was a little disappointed in their setlist, because aside from The Depths, every track was from their latest album Restoring Force.  As much as I love that album, I would have really loved to hear some of their older tracks, especially some songs they didn’t play at Leeds Festival, but that’s just me being picky.

After a few songs even reluctant crowd members were getting excited by the Orange County quintet.  Austin’s vocals were spot-on, and he did a great job of getting the crowd excited.  Aaron’s clean vocals were drowned out by the instruments a little, possibly down to nervousness or maybe his mic levels were too low – however, what I did hear of his voice was excellent.

The atmosphere during Another You was awesome – the crowd all held up their lighters or phones, and because my sister and I were the only people in our block of seats with their phone lights on, Austin came over and waved at us!  That was a pretty awesome feeling.

Overall, I definitely wasn’t disappointed by Of Mice & Men’s performance, and when they come back to the UK next March/April on tour I hope to be able to see them perform in a more intimate venue.

Now, with no further ado, on to the main event: Linkin Park. 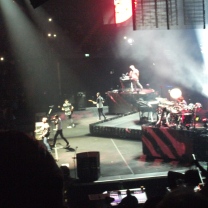 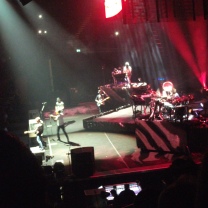 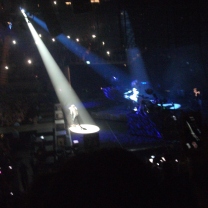 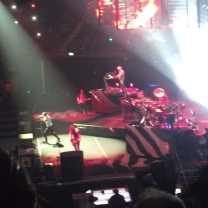 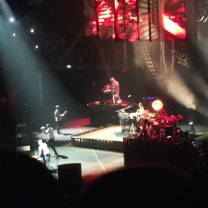 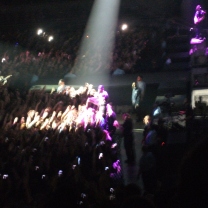 As soon as Linkin Park walked on stage, I knew the entire crowd was in for an unforgettable experience.  Chester and Mike’s vocals were on point throughout the entire night, even if Chester did sound a little nasal at times. Guitarist and Bassist Brad and Phoenix were great fun to watch interacting with the crowd and getting everybody hyped.  Drummer Rob’s performance was flawless throughout the entire night, and his drum solo near the end of the set was one of my show highlights.  Mr Hahn could have done more to interact with the crowd – when he had nothing to do, he simply sat down behind the turntables.

The band’s 16 years of touring was evident in that their performance was like a well-oiled machine.  However, Chester and Mike’s interactions with the crowd and each other gave the night its own unique spin.

Overall I was extremely happy with the setlist – the band used a lot of mash-ups and played shortened versions of fan favourites to try and cover a decent snapshot of their lengthy discography.  It was heartening to see the audience reacted just as positively to tracks from The Hunting Party to those from Hybrid Theory and Meteora, which just goes to demonstrate Linkin Park’s wide appeal, and explains their continued success.

Whilst it would have been good to hear more full-length tracks, obviously time constraints meant that just wasn’t viable, and although I was saddened that a lot of older songs were cut down, it makes sense that on The Hunting Party Tour they would want to play full-length songs from that album.

Highlights included the stripped-back piano mash-up of Leave Out All The Rest,Shadow Of The Day and Iridescent, and the entire encore which included Lost In The Echo, New Divide, Until It’s Gone, What I’ve Done and the incredible Bleed It Out.

Last night was my first arena gig since I saw Avenged Sevenfold at Wembley Arena last December, and I think I forgot just how much can be achieved in an arena – the scope for light shows, video displays and the audio quality just cannot be replicated in smaller venues.  Linkin Park definitely filled every inch of the O2 with their massive performance, and I’m sure they will continue on their path to world domination.